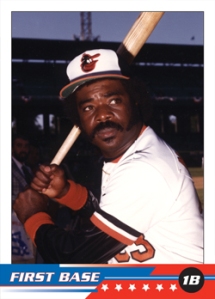 A sudden change in carpet texture beneath her feet alerted her that she was three yards from the exit. The warning track, as it was called by Peter Solomon, an avid baseball fan.  Trish stopped short, pulled out her key card, and groped in the darkness along the wall until she found the raised slot and inserted her card.  ~ Dan Brown, The Lost Symbol

I love it when art imitates life, or, rather, when art imitates baseball.  A friend alerted me to the above passage from a Dan Brown novel.  The warning track, according to The Dickson Baseball Dictionary, is the track in front of the outfield fence, the purpose of which is to “protect outfielders from crashing into the wall as they back up to catch a ball.  With his eyes fixed on the ball, a player knows he is nearing the wall as he senses the granular texture of the warning track with his feet.”

Ignoring the warning track and barreling into the outfield wall might get you the out you need against the opposing team, but sometimes it comes at a price.  Like yesterday, when the Angels’ Torii Hunter slammed into the outfield wall while chasing down a fly ball hit by Gaby Sanchez, bruising his ribs.  “I have to catch it at all costs,” Hunter said.  “But I paid for it.”  X-rays showed that Hunter is mostly fine, but he’ll be out for at least a couple of days.

In life, however, sometimes we need to heed our personal warning tracks, even when the thrill of the catch is just a little too tempting.  Like this past week when I:  flew to Houston on Tuesday, hung out with a friend, saw my most favorite band from Spain in concert that night, toured Johnson Space Center and attended an Astros game the next day, all before flying home on Thursday; went shopping and got mani-pedis with another friend on Friday; took a mini-road trip in my car with nearly non-existent air conditioning to see my beloved Bowie Baysox play the Flying Squirrels the very next day; spent Sunday catching up on everything from laundry to food prep for the week (while watching the Orioles defeat the Nationals on TV); went to work and the gym on Monday; crashed from exhaustion and called in sick on Tuesday (though still making it to dance class Tuesday night); and then went to Baltimore on Wednesday for the U2 concert from which I did not get home until after 1 a.m. this morning.

There are plenty of life lessons to be learned from baseball, if we choose to be enlightened.  I ignored the warning track after Houston, kept on going, and crashed big-time into life.  Now I’m exhausted and have a throbbing headache and laryngitis.  I had fun, but, like Torii, “I paid for it.”

June 23
1962:  Larry Doby signs with the Chunichi Dragons, becoming the first former leaguer (along with Don Newcombe) to play for a Japanese team.
1988:  George Steinbrenner fires Billy Martin for the fifth time.

June 24
1947:  Jackie Robinson steals home for the first time.  He’d do it 18 more times in his career.
1970:  The Reds play their final game at Crosley Field.
1979:  Rickey Henderson makes his major league debut for the Oakland A’s and steals his first base.
1984: Cleveland Pitcher Bert Blyleven records six putouts in a 9-inning game.

If baseball is life, then baseball vacations are life affirming. Take a mundane, uneventful life and add a little baseball in a city or town you’ve never been to. The result is a little time to remind yourself who you are and what’s important.

Seriously. I need to do this more often. Of course it probably helped that I stumbled upon the “Life is Good” store at Houston-Hobby airport. (Good friends help too.) Generally the “Do what you like, like what you do” slogan just taunts me. Today I realized it’s just a matter of perspective.

Sometimes all it takes is a little baseball to make life good again. 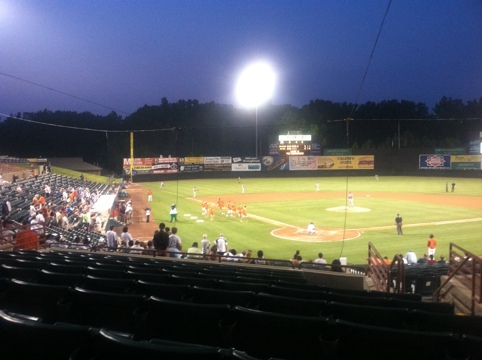 Last night I reached a major milestone.  I have now seen a game at 16 Major League Baseball stadiums – meaning I’m more than halfway toward reaching my goal of seeing a game at every MLB ballpark. My most recent accomplishment:  seeing a game at Minute Maid Park in Houston, Texas.  All I need now are the ballparks of the Yankees, Mets, Rays, Tigers, White Sox, Twins, Rangers, Mariners, Braves, Brewers, Cardinals, Reds, Giants, and Padres.

Of course, if they’d stop building new stadiums, my record would be at 18.  But San Francisco and Seattle decided to build new stadiums after I’d already been there.  In fact, my record is actually better than would appear, since I’ve seen games at other stadiums that no longer exist, such as my beloved Memorial Stadium and Cleveland Municipal Stadium.  Fortunately, a few old stadiums are still standing, so I have been able to at least see the Astrodome and Montreal’s Olympic Stadium, though, sadly, I will never see games played at those stadiums.

When I mention my goal to see every MLB ballpark, some people look at me oddly, or say, “well, that’s a different kind of goal.”  I do have other goals. But I have to admit this one is probably a little realistic for me than the others, like saving the world or losing 30 pounds.   Sometimes you just have to go with what you’re good at.

All facts are from http://www.canadianbaseballnews.com/.

June 13, 1948: Babe Ruth’s number is retired on the 25th anniversary of Yankee Stadium.

June 13, 1999: Cal Ripken gets six hits and scores 5 runs for the Baltimore Orioles against the Atlanta Braves.

June 15, 1980: Jorge Orta of the Cleveland Indians hits six singles in one game.

June 17, 1915: George Zabel makes the longest relief appearance in MLB history when he relieves an injured starter in the first inning and goes on to pitch 18 1/3 innings. 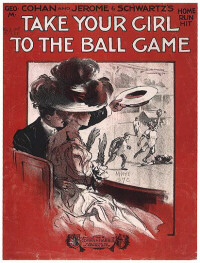 My last post about walk-up songs got me thinking about music and baseball more generally.  Obviously, music is an important part of the baseball experience.  But baseball has also had an impact on music – and still does.

It is estimated that more than one thousand songs have been written about baseball.  The very first one may have been “The Baseball Polka,” composed in 1858 by J.R. Blodgett.  Sure, some of these are from are from by-gone days, but many have been written by guys we’ve actually heard of, too, like John Fogarty.  Ok, perhaps that’s still the olden days for some of you.  However, baseball’s presence is still felt in today’s music.  Though presumably not about baseball at all, the title of Death Cab for Cutie’s “No Joy in Mudville” clearly pays homage to the classic poem, “Casey at the Bat.”  Then there’s “The Best” by Five for Fighting, which was on the sound track for the 2006 animated baseball movie, “Everyone’s Hero.”  It gets to the true essence of baseball:

What kind of love is the best kind of love?
The one above all the rest of the loves?
Grab a hat, a bat, a ball and a glove
It’s the love that I feel for you.

Now if this isn’t a clear indication of the great sociological impact of baseball, I don’t know what is.  I mean, how many songs have been written about golf?