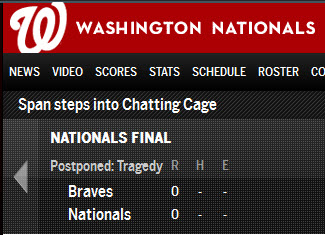 I wasn’t going to write about this tragedy, thinking it was inappropriate.  But they kept showing footage of it on the news last night, and kept mentioning Nationals Park, which is in the neighborhood where the shooting occurred.  Events that impact society inevitably also impact baseball, the players, and the fans.  It is a part of Baseball Sociology.

Yesterday, Parking Lot B at Nationals Park became a symbol of the tragedy that occurred down the street at the Washington Navy Yard as families were instructed to go to there to await news and be reunited with their loved ones who work at the Navy Yard.  Pictures of the stadium and Parking Lot B were in the papers and on TV.  Even when I tried to turn away from the sad events, I was reminded of what had happened.  The scoreboard section of the Washington Nationals’ website simply said:  Postponed: Tragedy.

The mood in Washington, DC, remains somber today.  People are shocked and saddened.  Those who weren’t directly impacted by the event may not know what or how they feel.  Nonetheless, when something like this happens, there’s always someone who points out that baseball is just a game:

For some reason, the role of sports after tragedy is often noted, perhaps a sign of the inseparable link between sport and society.  After Superstorm Sandy, parking lots the Staten Island Yankees’ MCU Park were used as a FEMA distribution center.  Shea Stadium served as a relief center and place for lodging and supplies for rescue workers after 9/11. The New Orleans SuperDome offered shelter after Hurricane Katrina.  Is Nationals Park now part of that list?

Last evening, MLB.com’s Richard Justice noted, “For a few days … the sadness will linger, hovering in the thoughts and minds of fans and players alike.” Justice quoted Nats’ manager Davey Johnson’s response to how the teams would prepare to play today’s games  “‘Hopefully, we’ll do something to take people’s minds off things for a few hours. That’s all we can do.’”

Perhaps there is more we as a society can do.  But I’m not sure what.  Until we figure that out, we can keep the victims of this tragedy and their families and coworkers in our thoughts and prayers.

If a picture is worth a thousand words, then these photographs of baseball stadiums tell us a lot about changes to the game, the impact of baseball on the community, and the social context and historical time in which the game is played.  This is the point of visual sociology, a field that uses visual images to study culture and society.

How do these pictures make you feel?  What do they say about the cities they depict?  (Hint: If they give you goosebumps or the chills or make you feel good inside, you are likely a baseball fan.)  For me, seeing where baseball was once played, where Jackie Robinson made his debut, and how the game fits into the local landscape, tells me a lot about the game, the fans, and the players.  It makes me feel that I am part of a tradition, linked with the past, present, and future of baseball.

So take a few minutes to look at some old baseball pics – they tell a thousand stories.  What do they tell you?

Nationals Park, home of the Washington Nationals, opened in 2008.