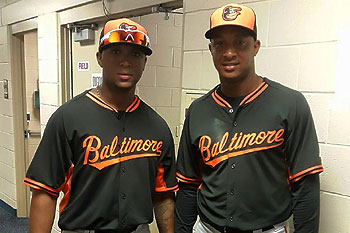 If your brother signs with an MLB team, can he get you a job too? I began to wonder if there was a “Brother Plan” in Major League Baseball when there seemed to be a lot of familiar names on the Bowie Baysox roster: Schoop, Britton, and, most recently, Joseph. And then there’s the Harper Brothers over with the Washington Nationals. What’s more interesting is that, of these brother pairs, the older one: (a) is still in the minors, and (b) has had a longer playing career there. Could there be some kind of deal where a player says, “sure, I’d love to sign with your team. But can you take my brother, too?”

One of my favorite sets of teammate brothers was Zach and Buck Britton. Zach is now the closer with the Baltimore Orioles, but I remember watching him pitch for the Bowie Baysox (the O’s AA team) in 2010 and 2011. Zach was signed by the Orioles in the 3rd round of the 2006 draft. He was in the minors from 2006 to 2011, and made his MLB debut on April 3, 2011. His brother Buck is a year and a half older. He was drafted out of college two years after Zach – in the 35th round of the 2008 draft. Buck became a fixture at the Bowie Baysox, playing third base from 2011 to 2014. After the 2014 season, Buck signed a minor league contract with the Dodgers, and spent the 2015 season with the Oklahoma City Dodgers. We still miss him in Bowie.

Jonathan Schoop, the reigning 2nd baseman for the Baltimore Orioles, signed with the team in 2008 and made his MLB debut in 2013. His brother Sharlon is four years older. Although he signed with the Giants in 2004, they never called up to the big leagues. The Orioles signed Sharlon to a minor league contract in 2013. We watched him play in Bowie in 2014; he spent most of 2015 with the Norfolk Tides, the Orioles AAA team. 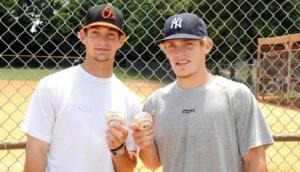 Then there’s the Joseph brothers. Younger brother Caleb is currently with the Baltimore Orioles. He spent 2008 through 2014 in the minor leagues, including all of 2010, and parts of 2011-2013 in AA Bowie. There he set franchise records for most games played (428), RBIs (237), and hits (416). Until this summer, I had no idea his older brother Corban (two years his senior) was also a professional baseball player. Corban Joseph was originally signed by the New York Yankees, and played 2 games at the MLB level in 2013. The Baltimore Orioles signed him as a free agent on June 15, 2015. He finished the 2015 season with the Bowie Baysox.

Of course, there are more brother duos in the majors and minors. I’ll discuss a few more tomorrow.

One thought on “The Brother Plan, Part 1”