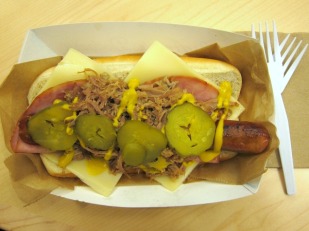 Every year it seems as if baseball stadium food gets more and more elaborate, if not stranger. In many cases, the offerings at the stadium range from standard ballpark foods (hot dogs, popcorn, nachos, etc.) to local fare (crab cakes in Baltimore, sushi in Seattle). Some foods are becoming more and more prevalent – even some that we don’t necessarily associate with baseball.

One of my favorite types of food is Cuban food. Thus, I decided to see if any teams – other than the Miami Marlins – offered Cuban sandwiches at the ballpark. This is now relatively easy to ascertain today as nearly all MLB team websites include an interactive amenities map on the pages about their ballparks. These maps provide the menu at most concessions stands in each ballpark.

To my surprise, there are at least 10 ballparks where you can buy a Cuban sandwich:

In 2015, it was reported that there was a Cuban Pretzel Dog at the Pittsburgh Pirates’ PNC Park – though, I didn’t see it on their amenities map for this year. It was described as “all the fixins of a Cuban sandwich … on a footlong in a pretzel bun.” Something similar – the Cuban Sandwich Dodger Dog – was sold at Dodger Stadium for Cuban Heritage night last year. I’m not sure if the “Cuban Dog” at Nats Park is a hot dog or not. I’ve seen the one it described as both hotdog and Cuban sandwich. Thus, I will soon be undertaking a research expedition there to find out for sure. I’ll keep you posted!

Of course, as a sociologist, I wanted to know why are Cuban sandwiches popular in these ballparks and cities, but not others? There are nearly 1.8 million Cuban Americans in the United States – 84% live in just 5 states: Florida (68%), California (5%), New Jersey (4.7%), New York (4%), and Texas (2.6%). Correspondingly, Cuban sandwiches are sold at several of the MLB parks in those states.

In addition, three of the MLB parks that serve Cuban sandwiches, while not appearing in the top 10 Cuban American MSAs, are known for Cuban players that played in those cities and, accordingly, serve Cuban sandwiches in their honor – Tony Oliva in Minnesota and Luis Tiant in Boston. As for San Francisco, though not known for its Cuban population, the Giants certainly have seen their share of Cuban-born players, including Tito Fuentes.

3 thoughts on “Cuban Sandwiches at the Ballpark”