Psssst. Wanna hear a secret? This is probably the greatest Major League secret of all time: during Spring Training you can go watch Baltimore Orioles minor league spring training games at the Buck O’Neil Baseball Complex at Twin Lakes Park in Sarasota, FL. You can get as close as a Little League game and watch the up-and-coming Orioles perfect their skills. And you don’t even need a ticket. It’s the coolest thing EVER!

I was a little nervous at first. There wasn’t anything on the Orioles’ website or other Spring Training websites about the details of  minor league camp. After all, for at least the

last couple years, there has been information on spring training for the O’s minor league players on various websites. So I wondered why nothing was published this year. Nonetheless, we approached tentatively, just as players began leaving the facility’s building. Not wishing to disturb them, we slowed our pace. After the first group of players passed us, we walked up to the stands, not much larger than your typical local baseball field’s seating area, and took our places. Soon we began seeing familiar names and faces: Henry Urrutia, Adrian Marin, Drew Dosch, and Glynn Davis – all Bowie Baysox players. 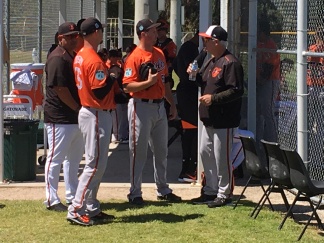 But then I noticed two more familiar players: Caleb Joseph and Zach Britton. Britton was scheduled to get some work in at minor league camp the day we went. We got to see Zach Britton in action, close-up, at minor league camp! This was one of the best spring training experiences I’ve ever had! (Oh, by the way, Zach threw 12 pitches and struck out the side.)

We got to see our favorite minor leaguers at a game that felt like it was just for us. There were only a few other fans, a bunch of minor leaguers, and us. Of course, there were also no announcements, no scoreboard, and no other distractions. Just simply baseball – and totally awesome! 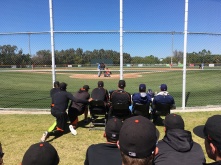