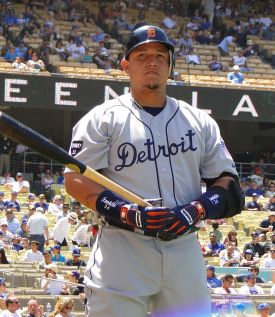 Venezuela was back in the U.S. public consciousness recently, if only for a brief moment. Earlier in the week, Miguel Cabrera posted several videos on social media speaking out against the violence and unrest in Venezuela. On Monday he stated, “I am tired of hearing that they are going to kidnap my mother, and I don’t know whether it is a policeman or a bad guy, I don’t know who they are. All I know is if I don’t pay, those people disappear.”

Hall of Famer Luis Aparicio declined to participate in the All Star festivities celebrating Latino players in MLB, noting: “Unfortunately, conditions in my country prevent me from traveling.”

So what’s going on in Venezuela, and why do we know so little about it? For these Venezuelan players and those who support them, it’s a matter of freedom. For those of us who pay little attention to Venezuela, we need to be educated on the issues. Next week, I’ll post more of the background of the political and economic issues in Venezuela, as well as the role MLB has played in that country.

2 thoughts on “What’s Going On In Venezuela?”