I’m not sure when LEGO Everything became a thing, but it seems in addition to LEGO Superheroes and LEGO Star Wars characters, there also are LEGO baseball players. This became abundantly clear when the LEGO Play Ball Tour came to Prince George’s Stadium this week. In addition to having LEGO figures along the concourse and LEGOs for kids to build and create with, we also had the LEGO Baysox Starting Lineup on the scoreboard. (With the exception of the number 7 batter, Chris O’Brien. For some reason, Chris didn’t get his own LEGO character.) Let’s go (LEGO) Baysox! 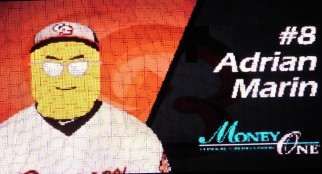