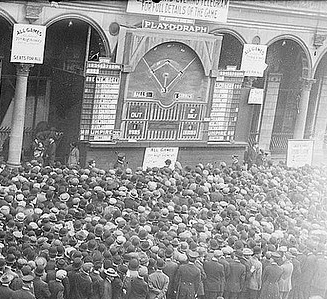 Crowd watching the 1911 World Series on a Play-O-Graph outside the New York Herald building. Photo courtesy of the Library of Congress.

What did we do before television? How did people watch baseball? Of course, there were radio broadcasts, but there was also the Play-O-Graph. This animatronic machine simulated the action in the game on a large replica of the field. Operation of the Play-O-Graph required a telegraph operator transmitting the action in the game and two operators moving the graphics around the board to represent the live-action game.

Play-O-Graph machines seem to have been found most often outside of newspaper buildings. As the picture above shows, the Play-O-Graph depicted what was happening in the game, while the ad above it encouraged people to read the paper “for full details of the game.” According to an article posted on Citylab.com, in the early 1900s, numerous patents were issued for similar systems. Competing products included, the Nokes Electrascore, the Compton Electric Base Ball Game Impersonator, and the Jackson Manikin Baseball Indicator.

Thanks to Old-Time Baseball Photos for cluing me into this awesome invention! There have actually been several articles and blog posts written about the Play-O-Graph, so check them out for more info – and check out some more Play-O-Graph pics below.

Play-O-Graph sponsored by The Washington Post, depicting the 1912 World Series. Photo courtesy of the Library of Congress 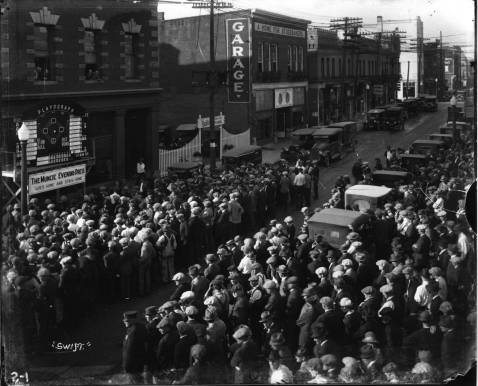 Crowd viewing the World Series on a Play-O-Graph in Laramie, WY, 1926. Photo courtesy of Pinterest.