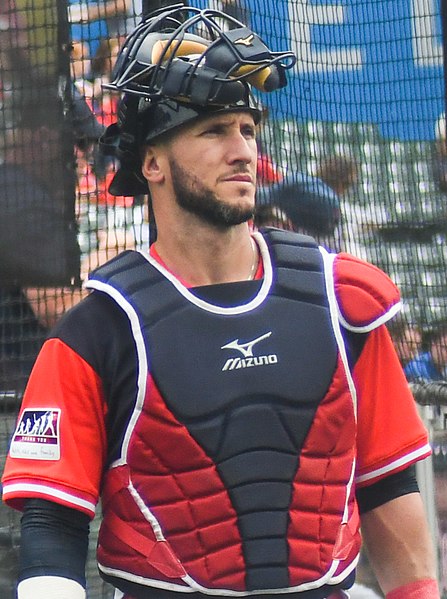 Yan Gomes with the Cleveland Indians in 2017 (though it he also wears these colors with the Nats). Photo by Erik Drost via Wikipedia.

The other day Thyago Vieira came on to pitch against the Baltimore Orioles for the Chicago White Sox. I thought to myself, “What a cool name. I wonder where he’s from.” I’m always drawn to people with cool names. I looked him up on my handy MLB app and found out he was from Brazil. So my next thought was, “Wow. How many players have been born in Brazil?”

The answer is a whopping five: Yan Gomes, Andre Rienzo, Paulo Orlando, Thyago Vieira, and Luiz Gohara. (Yan Gomes? Yan Gomes of the Nationals? I had no idea he was Brazilian!)

Interestingly, they are all current players and the first Brazilian to make his MLB debut was Yan Gomes – on May 17, 2012. Gomes was born in Sao Paulo, Brazil, on July 19, 1987; when he was 12, his family moved to the United States. He attended high school in Miami and went to the University of Tennessee and Barry University.

Of course, this leads to my next question, what was it only seven years ago that the first player from Brazil made his MLB debut?