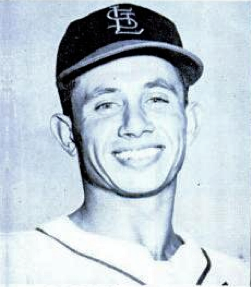 Harvey Haddix with the Cardinals in 1953 (photo courtesy of Wikipedia)

Sunday marks the 60th anniversary of the game in which Pittsburgh Pirates pitcher Harvey Haddix took a perfect game into the 13th inning against the Milwaukee Braves. He’d retired 13 consecutive Braves in 12 innings, but the Braves pitcher Lew Burdette also had allowed no runs. Unfortunately, a fielding error by the third baseman in the bottom of the 13th allowed the first Braves batter to reach base. After a sacrifice bunt and an intentional walk (to none other than Hank Aaron), Haddix allowed a hit that resulted in the Braves winning 2-0. Despite the loss, the game has been called “The Greatest Game Ever Pitched.”