Ozney Guillen, who had his first professional managing job this last year with the Tri-City ValleyCats, will be managing the Colombian team in the Caribbean Series. Check out the video below from when he was introduced by the ValleyCats:

Ozney Guillen with the Tri-City ValleyCats (photo courtesy of LinkedIn)

The manager of the Colombian team in this year’s Caribbean Series is Ozney Guillen, son of former Major League manager, Ozzie Guillen. Ozney was born on January 3, 1992, in Boca Raton, Florida. In 2010 he was drafted by the Chicago White Sox in the 22nd round of the amateur from Monsignor Edward Pace High School in Miami Gardens, Florida. Instead of signing with the White Sox, however, he attended Miami Dade College and St. Thomas University. Ozney was not drafted in subsequent drafts.

In 2019, Guillen managed the Tri-City ValleyCats, the Houston Astros’ Short Season-A affiliate in the New York-Penn League. The team had their home opener on Father’s Day, with Ozney’s father on hand. The Valley Cats went 32-42 under Guillen’s guidance.  His season was not without controversy, though. In a game against the Vermont Lake Monsters in June last year, Guillen was ejected from a game after arguing with an umpire. He was ultimately suspended for two games for the episode for swearing at the umpire. In August, Guillen stated that he was “not a fan” of minor-league playoffs and preferred that his players get rest after the season. This caused several to second-guess his team’s losing record for the season. The Astros announced they would not retain Guillen for the 2020 season.

He currently manages Los Vaqueros de Monteria, who are representing Colombia in the Caribbean Series. 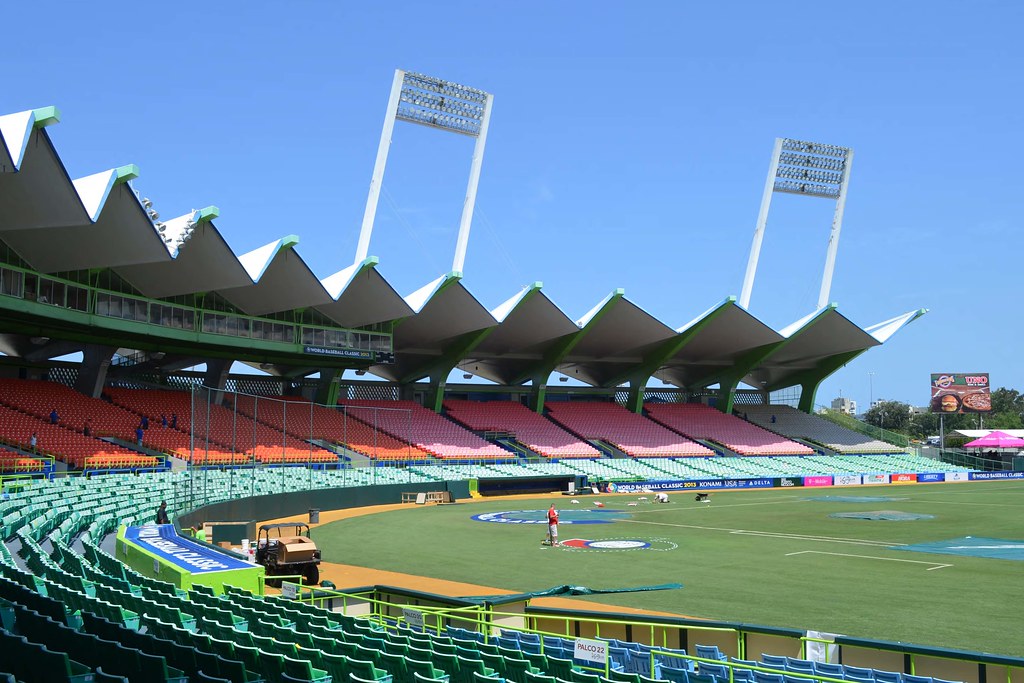 Hiram Bithorn Stadium in Puerto Rico – location of the 2020 Serie del Caribe. Photo Courtesy of the National Register of Historic Places on Flickr

The Caribbean Series begins on Saturday! This year’s series will take place in Puerto Rico’s Hiram Bithorn Stadium in San Juan. Despite the recent earthquake in Puerto Rico, the Series will go on as scheduled. The Commissioner of the Caribbean Professional Baseball Confederation, Juan Francisco Puello, assured the teams and the public that stadium sustained no damage during the earthquake. The nations playing are: Mexico, Cuba, the Dominican Republic, Panama, Puerto Rico, and Colombia. The Colombian team replaces Cuba, which was unable to obtain visas for the series. The full schedule of games is below.

Stay tuned this week as we prepare for the 2020 Series!

Since the above is hard to see, use the schedule below, and just swap out Colombia for Cuba – the rest of the schedule remains the same:

There are events that transcend one sport – or even all of them – that can touch almost everyone. I’m not a basketball fan, but it is clear the impact the death of Kobe Bryant has not only on basketball or the sports world, but society as a whole.

I was doing research for a different post, when I ran across this Tweet from one of my favorite former Orioles, Adam Jones:

Then I saw this one, and began to get concerned and very sad:

15 hours ago man… I actually cannot believe this. Praying for his family and close friends. Hoping it’s not true https://t.co/WI9UuuTGQ8

I jumped to Google News and read what had happened: on Sunday afternoon Kobe Bryant and several others, including one of his daughters, died in a helicopter crash in California. By then, the tributes began pouring in on social media. So much so that for awhile I couldn’t even follow the news on Twitter and simply kept getting the message, “Twitter is over capacity.”

Over the next few hours, many baseball players expressed their condolences:

I can’t believe this man. Unbelievable. RIP to a real GOAT, Kobe Bryant. Another one gone too soon. #mamba

Man…. KOBE!! 😢 unbelievable heartbreaking news!! 💔 thoughts and prayers to the families of all the victims in this horrible accident! #RIPKobe

My heart hurts for Kobe and his family. Life aint fair man. This cant be

Unbelievable!! I prayed this was fake…. Rest in Paradise to an absolute legend! #KobeBryant #24forever

Prayers to the Bryant family. So sad, such a loss for the World 😔

My heart and prayers go out to the Bryant family and the passengers’ families on this sad day.

The impact Kobe had on the world cannot be expressed in words. RIP to a legend and a friend… 🙏🏼

Rest in peace to a legend that will never be forgotten. Wow. Incomprehensible. #RIPMamba

Still can’t believe it! Im saddened by the news . A Real Life Hero #RIP . My condolences and prayers to the Bryant family . #blackmamba #lakers #nba pic.twitter.com/BYumFnGAic

Wow. What a sad day. Keeping Kobe’s family and friends in my prayers. I live in the same area and would see him time to time. He was a gracious superstar. Always took the time to smile and say hello to his many fans (me being one of those fans) #sadday @masnOrioles

I can’t think straight right now.
My heart is with Kobe’s wife Vanessa & their children who not only lost a husband and dad but a daughter and sister, Gianna. Love & prayers for all their friends & for all the families and friends of those who lost their lives today. Love to LA. pic.twitter.com/aiRYKeGTYV

The world has lost one of the greatest to ever strap them up and take to the hardwood floor. You will be missed Black Mamba. May God continue to bless you and your beautiful family.

“The most important thing is to try and inspire people so that they can be great at whatever they want to do.” pic.twitter.com/eOhEezOjow

My heart hurts so much right now. I still can't wrap my head around this. How can it be?

I learned so much from Kobe Bryant. He was naturally gifted, but had a passion for basketball like no one else I've ever seen. pic.twitter.com/72OX3Z8Sv9

And those were in just the first few hours since the news broke. Since then, countless messages have been posted. Perhaps Noah Syndergaard summed it up for everyone:

On Thursday, MLB announced it would be “presenting sponsor” of USA Softball’s “Stand Beside Her” tour, meaning “MLB will work in conjunction with USA Softball in select cities to host ‘PLAY BALL’ events, MLB’s signature youth engagement activity of which USA Softball is a flagship partner.” In addition, the MLB logo will be featured on the team’s uniforms and signage promoting the training tour as the team prepares for the 2020 Olympics.

The initial schedule for the tour includes the following events:

We're proud to announce that @MLB has stepped up to the plate as the Presenting Sponsor of the #StandBesideHerTour!

I’m totally with that one guy that didn’t vote for Jeter. Perhaps he’s an O’s fan. Perhaps he remembers “The Incident.” I hope we never know who he or she is, so his/her secret hero identity can remain intact. However, when you buy tickets for when the O’s visit the Yankees during Spring Training, the Yankees never stop bother you. The last email they sent included the graphic below. I particularly like how it highlights that growing bald spot.