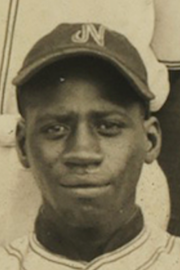 Happy Birthday to Leon Ruffin, who was born on this date in 1912. Ruffin was a catcher in the Negro Leagues and the Mexican League in the 1930s and 1940s.

Charles Leon Ruffin was born on February 11, 1912, in Portsmouth, Virginia. He began his Negro League career in 1935 at the age of 23 with the Brooklyn Eagles. When the team was purchased in 1936 and merged with the Newark Eagles, he became a member of the Newark team. Ruffin was traded to the Pittsburgh Crawfords, where he played in 1937, 1938, and the beginning of 1939 before being traded back to the Eagles in May 1939. Later that year he was traded to the Philadelphia Stars, where he also played in 1940 before joining the Mexican League. Ruffin played for the Algodoneros de Union Laguna in Torreon through 1941.

Ruffin returned to the Eagles for the 1942 through 1944 seasons. However, he played only a few games in 1944 as he had enlisted in the Navy in 1943, serving from 1943 to 1945. Ruffin returned to the Eagles in 1946. That year he was named to the East All-Star team (along with Larry Doby, Monte Irvin, and Leon Day, among others) and played in the all-star game in Washington and the East-West Classic in Chicago. He also caught all seven games of the 1946 Negro League World Series. In his 10 years in the Negro Leagues Ruffin had 478 at-bats with a batting average of .201. He had 96 hits, four of which were home runs.

Ruffin returned to the Mexican League in 1947, playing for the Diablos Rojos del Mexico. According to one Baseball-Reference page, Ruffin played in St. Jean, Quebec, Canada, for the St. Jean Braves of the independent Provincial League in 1948. He played his last two seasons with the Houston Eagles in 1949 and 1950.

After his career, Ruffin worked as a presser at a dry cleaners in his hometown of Portsmouth, Virginia. He also was a manager and occasional player for local semipro teams. Ruffin suffered a stroke and died on August 14, 1970.