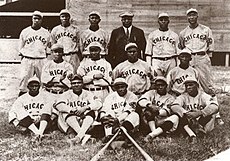 Tomorrow celebrate the centennial of the Negro Leagues in baseball. On February 13, 1920, owners of African American baseball teams met in Kansas City to discuss the prospect of starting their own league. The main proponent of the idea was Rube Foster, former pitcher and owner of the Chicago American Giants. Foster had been advocating for a league comprised of African American teams owned by African Americans for some time, stating, “The wild, reckless scramble under the guise of baseball is keeping us down and we will always be the underdog until we can successfully employ the methods that have brought success to the great powers that be in baseball of the present era: organization.” In 1919, he wrote in the Chicago Defender of the need to “create a profession that would equal the earning capacity of any other profession… keep Colored baseball from the control of whites (and) do something concrete for the loyalty of the Race.”

At the conclusion of the meetings on February 14, the Negro National League was born; its slogan was, “We Are the Ship, All Else the Sea.” The original members of the league were the Chicago American Giants, Detroit Stars, Kansas City Monarchs, Indianapolis ABCs, St. Louis Giants, Cuban Stars, Dayton Marcos, and Chicago Giants. Opening Day was May 2, 1920, with the home team Indianapolis ABCs beating the Chicago American Giants 4-2.

Several teams entered and exited the Negro National League throughout its 11-year history. Unfortunately, the league folded after the 1931 season in the wake of the Great Depression. Other leagues were formed to take its place. These included the East-West League, which was founded in 1932, and a new Negro National League, established in 1933. Four years later, in 1937, the Negro America League was created. Some of the Negro minor leagues were: the Negro Southern League, the Negro American Association, the East Texas Negro League, and the Arkansas-Louisiana-Texas League.

After Jackie Robinson broke the color barrier in Major League Baseball in 1947, the Negro Leagues began a second decline. By 1949, the Negro American League was the only major Negro League still in operation. It became a minor league a couple years later and folded in 1958. A few teams survived after that, but were no longer organized into leagues. The Indianapolis Clowns continued to play exhibition games in to the 1980s, but mostly as an entertaining sideshow similar to their roots as the Ethiopian Clowns, who have often been likened to the Harlem Globetrotters.