Yesterday was Memorial Day, meaning summer is unofficially here! For many of us, summer means an afternoon or evening at the ballpark with a hot dog and cold beverage. Will we have to do without that this year? Well, maybe not – at least, sort of. Given the current restrictions due to coronavirus as well as concerns about whether or not Minor League Baseball will be played this year, many MiLB teams are coming up with unique solutions to stay in business right now – or at least entertain us. The Pawtucket Red Sox, for example, have found a way to allow fans to experience their 78-year old ballpark, which was to be their home for just one more season this year. With Rhode Island now allowing restaurants to serve customers outdoors, the PawSox are offering on-field dining. Capacity is limited to 20 tables of no more than 5 people. There is at least 8 feet between tables. 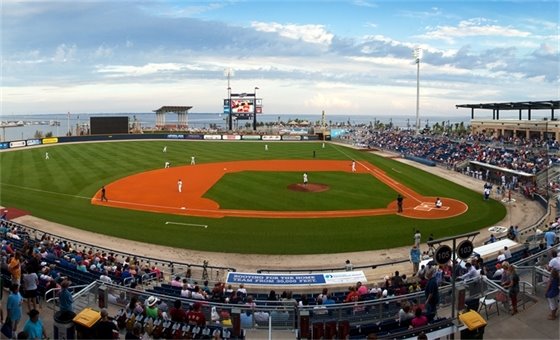 Blue Wahoos Stadium in Pensacola, Florida. Photo courtesy of the City of Pensacola.

According to MiLB.com’s Ben Hill, several teams have offered curbside pickup of ballpark foods, at least on a limited basis. In fact, the Pensacola Blue Wahoos, are not only offering curbside pick-up, but are providing “safe outdoor dining for lunch, dinner and brunch with eating spaced throughout the ballpark, giving fans access to Blue Wahoos Stadium’s award-winning views of Pensacola Bay and exclusive areas of the ballpark.” The team also explained their safety precautions:

“The safety of customers and Blue Wahoos staff is the team’s number one priority. All Blue Wahoos staff will have their temperature taken when they arrive at the ballpark each day and all staff will wear a protective mask when inside the ballpark. All in-stadium seating will spaced a minimum of six feet apart. Fans in line to order will be required to maintain six feet distance between themselves and other customers. During all in-stadium dining availability, a Blue Wahoos Compliance Manager will oversee the ballpark to ensure physical distancing and safety guidelines are strictly followed by all. In accordance with CDC COVID-19 safe dining guidelines, no refills will be offered on any product and all condiments will be delivered in single-serve packets.”

The Blue Wahoos have also put their stadium on AirBnB. For $1,500 a night, you can stay at the ballpark. You get access to the clubhouse, batting cages, and field. A bedroom connected to the clubhouse sleeps 10 and includes a kitchenette. Sign me up!

The Pensacola Blue Wahoos, the Double-A affiliate of the Minnesota Twins, have placed their stadium on AirBnB.

For $1,500 per night, guests staying at the ballpark will have full access to the clubhouse, a large bedroom with 10 beds, the batting cage, and the field itself. pic.twitter.com/oANl6UTP4e

Here are some other examples of teams offering curbside pickup of ballpark food:

Minor league teams are offering other forms of entertainment as well. The Daytona Tortugas have started a Summer Movie Series at their stadium, Jackie Robinson Ballpark. Naturally, the first movie shown was “42.” On-field seating areas are at least 10’ by 10’ (for a family of four) with 10’ walkways in between. Several different packages are available to be reserved on their website and concessions will be available for purchase.

BREAKING: Jackie Robinson Ballpark will re-open gates on Friday, May 22nd with the launch of our Summer Movie Series! Enjoy the first ever Movie Night at The Jack with limited, socially distanced on-field seating options. Reserve your family field space now! #StandWithTheJack pic.twitter.com/tm2czMH6Ix

GOOSEBUMPS. Watching 42 on the same field that Jackie graced for the first time in his professional career. Amidst uncertain times, this is a night we will never forget.

Welcome to Jackie Robinson Ballpark. We are the Daytona Tortugas. This is our community. #ForThe386 pic.twitter.com/MR3TKQyuWT

ERECTED BY THE
CITY OF BALTIMORE
1954

TIME WILL NOT DIM THE GLORY OF THEIR DEEDS

Thank you to those who gave their lives for our freedom. Happy Memorial Day!

Orioles’ great Brooks Robinson turned 83 on Monday and some of his friends and teammates threw him a birthday party on Zoom – which is one of the best things I’ve seen all year!

The best stories were told tonight.

We threw a surprise birthday party for Brooks Robinson— check out our YouTube tomorrow to see how it all played out. pic.twitter.com/J03ofG0eUr

A legendary night with Brooks and a few of his pals.

Its nearly the end of May and we still have no baseball in the United States. Fortunately, we do have daily broadcasts of the Chinese Professional Baseball League and the Korea Baseball Organization. So, now all we need is some stats to study.

Fortunately, Sports Reference has updated their stats on the CPBL going back to its first season in 1990. (If you’re looking for the history of the KBO, those stats are also on Baseball Reference.) For example, if you want to learn more about the 2013 CPBL season, when Manny Ramirez appeared in 49 games for the EDA Rhinos, you can get all the stats you want, including the league batting leagues for the season:

Edgar Martinez in 1997. Phone by Clare_and_Ben via Wikipedia

Earlier this week, MLB.com posted an article on the weirdest MLB promotions ever. The article mentions a functioning Edgar Martinez bat light bobblehead that was given away by the Seattle Mariners in 2017. The idea came from a popular series of commercials for Eagle Hardware in which Mariners players appeared in the hardware store.

Below is the series of Edgar Martinez commercials, which are absolutely priceless – and check out the other Eagle Hardware Mariners ads with Randy Johnson, Jay Buhner, and Dan Wilson on the Jones Advertising YouTube page. 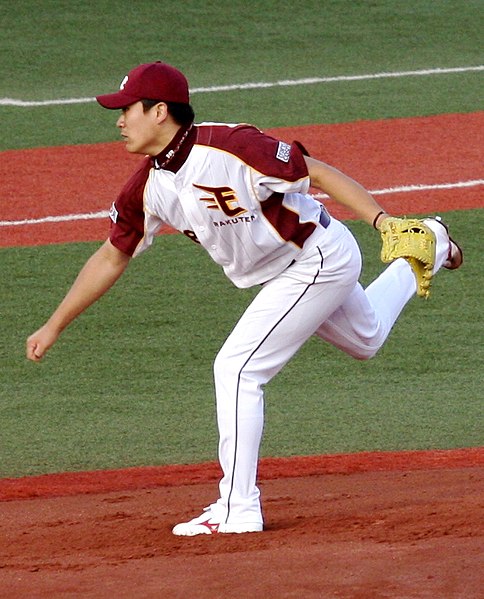 Masahiro Tanaka pitching for the Ratuten Golden Eagles in 2007. Photo courtesy of Wikipedia.

I’ve been posting about the Chinese Professional Baseball League, Korea Baseball Organization, Hyun Soo Kim, and related topics for weeks now. In fact, every May, I’ve written something in honor of Asian Pacific Heritage Month. To organize this growing body of blog posts, I’ve put together some links to the posts I’ve written over the years about Asian Pacific Islanders; professional baseball in Japan, Korea, and Taiwan; and players from Asian countries, American Samoa, and Hawaii. Check out the links below! 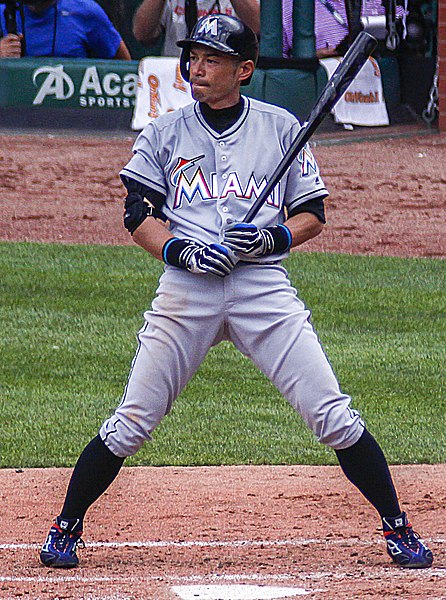 Ichiro Suzuki in 2017. Photo by Johnmaxmena2 via Wikipedia. 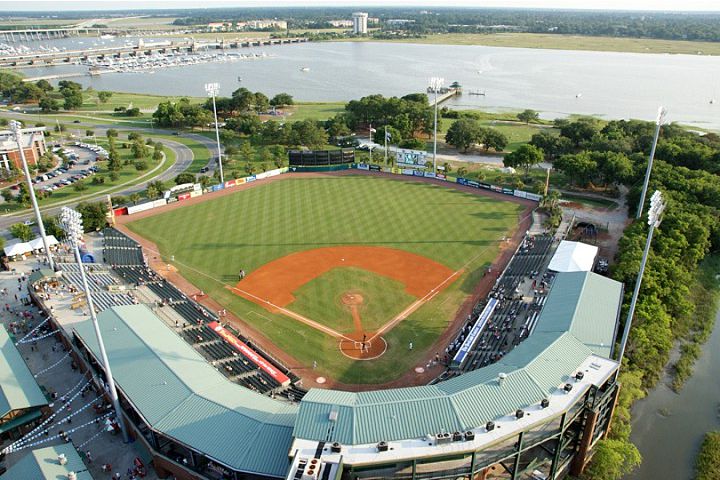 Yesterday, the Charleston RiverDogs, single-A affiliate of the New York Yankees, announced a new partnership with the Samsung Lions of the Korea Baseball Organization (KBO).  The team noted: “This mutually beneficial relationship between the two organizations is set to begin immediately with the main objective of encouraging fans to ‘adopt’ the Samsung Lions as the Charleston RiverDogs’ partner team. The two teams will work together to cultivate a fanbase of Lions fans in the Charleston-area, as Lowcountry baseball fans anticipate the return of baseball at Joseph P. Riley Jr., Park.” The partnership is a result of a 2018 visit of the Samsung Lions front-office staff to the RiverDogs and Charleston, South Carolina.

The press release further noted the highlights of the partnership:

Below are Tweets from the two teams regarding their partnership (note that the RiverDogs now spell out their Twitter handle in Korean):

Hello, Charleston RiverDogs💙
We are in this together! 🦁🐶 https://t.co/OP2sXDWw4X

Hopefully this will be the beginning of a beautiful friendship!