Yep. It’s only Thursday, but I uncovered some great videos so I figured I’d post some today and some tomorrow. And we need the diversion. We’re all missing baseball right now. Many of us are missing Adam Jones (and have been), and I know one person (and only one) that misses Orioles TV announcer Gary Thorne. So, here are Jones and Thorne from the fanless game a few years ago:

Tune in tomorrow for more Gary! 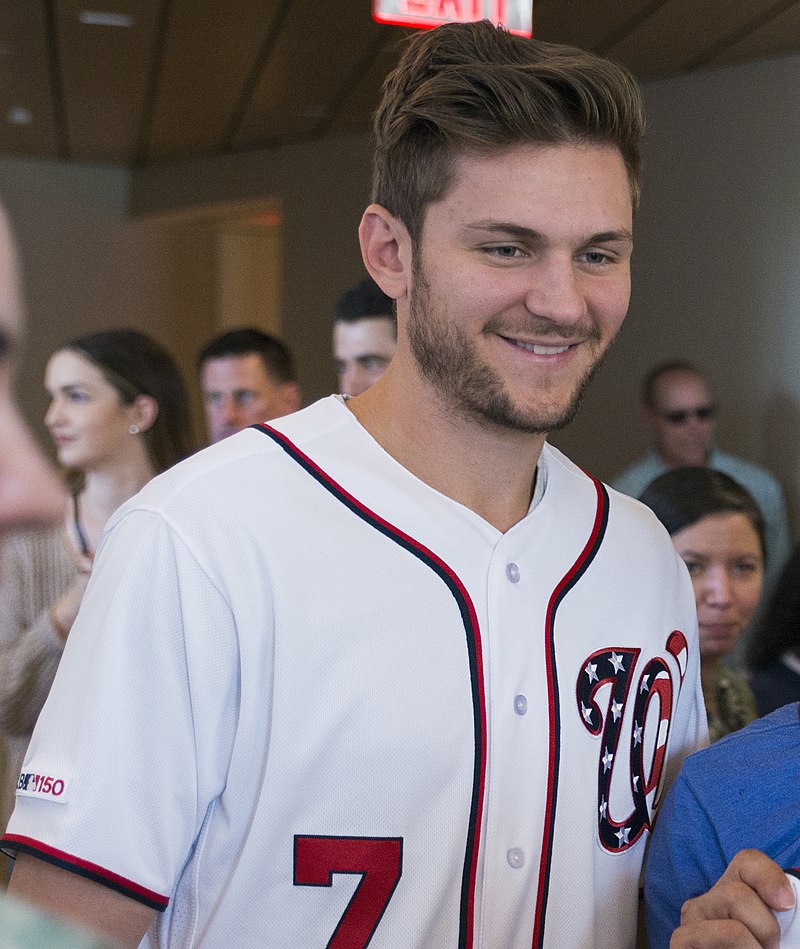 Washington Nationals’ SS Trea Turner – why isn’t he on the list? (Photo by the U.S. Navy, via Wikipedia)

This year – for the first time – MLB is allowing fans to vote for the “All-MLB Team.” According to MLB.com, this is “baseball’s first-of-its-kind foray into a star squad that covers the full breadth of the Major League season and does not separate players by league.” In other words, it’s the post-season determination of the best players, kind of like the All-Star teams, but given a full year’s performance. Fans can vote through December 3 at 5 p.m. using this website:

Fifty percent of the vote will come from fan voting and 50 percent will come from a panel of experts. The “inaugural” All-MLB team will be announced on December 10 during the annual Winter Meetings.

My problem with this “election” is that I’m not sure how the players that made the list were selected. I’ve read a bunch of articles – all complimentary – about the voting, but none of them explained the origin of the lists.  If you check their stats on the MLB stats page, they are not necessarily the top ranked players at each position (depending on which stat you sort on). I compared the list of players you can vote for to a few who didn’t make the list – and still can’t figure out how they came up with the list. (If someone knows, please let me know!) 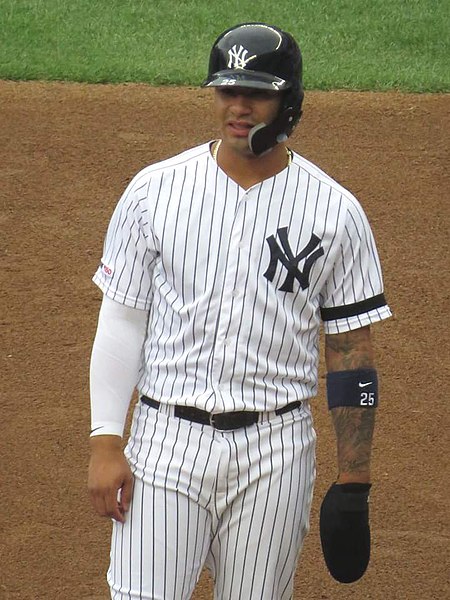 Yankees’ SS Gleyber Torres made the list. (Photo by DR Buddie, via Wikipedia)

For example, the players you can vote for as the All-MLB Team shortstop appear below (with their stats):

I’m sure we can make arguments for other players in other positions (Adam Jones? Manny Machado?), but I’ll just save that for another day. If you want to vote for this new award, you have until December 3 at 5 pm.

This past week, Gleyber Torres became tied for the most home runs against a single team in one season when he hit his 13th home run against the Baltimore Orioles on Monday. (It was also his third of the day against the O’s.) The record of 14 was set by Lou Gehrig against the Indians in 1936.

🔹 13 of his 26 HR this season are against the Orioles
🔹 T-2nd most HR vs. a single team in a single season in MLB history

As one writer put it, “Gleyber Torres owns the Baltimore Orioles now.” The Ringer went so far as to investigation the question, “What if Gleyber Torres Played Only the Orioles?” (The answer: 117 home runs.) Here are a few of the reactions to this feat, not only to Torres, but to Orioles announcer Gary Thorne.

My favorite baseball team is henceforth known as the Baltimore Gleybers https://t.co/ib4Sh2fSeD

Gleyber Torres has 26 home runs this season. HALF of them have come against the Orioles 😳

All 13 Gleyber Torres homers against the Orioles this year!

Gary Thorne getting more depressed after each one is the best part 😂 pic.twitter.com/rnn4D2yl77

Paul O'Neill invades the MASN booth after Gleyber Torres hits yet ANOTHER home run off the O's. pic.twitter.com/VAHFRco9eF

Earlier this week, the baseball world paid tribute to Home Run Derby, the Bat Dog of the Trenton Thunder who died after a bout with cancer. In memoriam, Ben Hill of milb.com wrote a great piece today on baseball’s bat dogs. The Trenton Thunder announced that they will celebrate Derby Day on January 26th, Derby’s birthday.

It is with great sadness that we share the news that our wonderful second generation Bat Dog, Home Run Derby, passed away this weekend.

On Friday, Jan 26, we'll celebrate #DerbyDay on what would have been his 10th Birthday. https://t.co/7ZRZlNEKWe pic.twitter.com/gJyV5CaDoX

Just to cheer us up a little, here is some adorable footage of Gleyber Torres playing with Derby and his son, Rookie:

Thanks for the memories, Derby! May you now get all the dog treats you want!