Doug Glanville penned a powerful piece on racism that was published on Monday in The Undefeated. It needs no summary or introduction. I’ll just post the link here:

“The ‘comma effect’ on bias and Black lives: That grammatical pause helps explain how racism thrives,”
by Doug Glanville

Glanville made his MLB debut with the Chicago Cubs on June 9, 1996, and played for the Cubs (1996-97, 2003), Philadelphia Phillies (1998-2002, 2004), and Texas Rangers (2003). Since his retirement from baseball, Glanville has been a baseball consultant and analyst, and has written extensively about baseball. In addition to a book on his experiences in MLB, he has written articles for The New York Times, ESPN The Magazine, The Atlantic, and The Athletic. Check out a few of his other pieces on race:

Tug McGraw with the Phillies. Photo courtesy of Wikipedia.

Some days you tame the tiger, and some days the tiger has you for lunch.
– Tug McGraw

This quote seemed in keeping with my mood lately. But even when we’re feeling defeated, we need to keep hanging in there!

On what would have been Opening Day, Fanatics apparel company and MLB announced that Fanatics would be producing hospital masks and gowns, instead of MLB uniforms, to aid in the fight against coronavirus. To start with, they are using the fabric that is normally used to produce New York Yankees and Philadelphia Phillies’ jerseys:

We’re proud to partner with @MLB to support emergency personnel who are fighting against COVID-19 and face a need for masks and hospital gowns. We're utilizing our manufacturing plant in Easton, PA to make masks and gowns out of the same jersey fabric that the players wear pic.twitter.com/5jEg1B2iUa

A-Rod thinks its a good idea:

Couldn’t be prouder of our game right now. #RobManfred & @MichaelGRubin have stepped up to the plate. @MLB & @Fanatics have halted the production of MLB player jerseys & are using that same jersey fabric to produce masks & hospital gowns to help frontline emergency personnel. pic.twitter.com/4tOkTNmqz1

And ESPN interviewed Fanatics’ company chairman, Michael Rubin, on this and other issues: On March 4, 1944, the Philadelphia Phillies announced that Mrs. Elizabeth Crooks had won their team naming contest and their new alter ego would be the Philadelphia Blue Jays. According to SportsLogos.net, Crooks said she chose the name because “’the blue jay reflects a new team spirit, is colourful in personality and plumage, is a fighter with an aggressive spirit who would never admit defeat.’” As a result of her winning entry, Mrs. Crooks won a $100 war bond and a season ticket to Blue Jays games. Check out the 1944 logo here.

Carpenter also developed a farm system consisting of 15 teams, many which were identified with the same blue color as the parent team, including: the Utica Blue Sox, the Wilmington Blue Rocks, and the Bradford Blue Wings.

Mrs. Crooks’ name for the team was only used for a couple seasons and completely disappeared by 1949.

The Little League World Series continues this week, with the final games on Sunday. Which reminds me, I never posted my pictures of Little League Day at the Phillies, which happened on June 23.

The Little Leaguers needed to be at the stadium about 3 hours before the game even started. It was a hot, sunny day, though it wasn’t too bad in the sun. But by the time they reached the doors to the field, those Little Leaguers were ready to go, and they kept inching forward until they finally got the green light to head out: 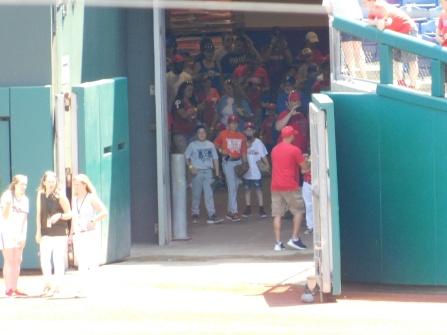 They poured out of that outfield door and kept on coming as many, many Little Leaguers circled the field: 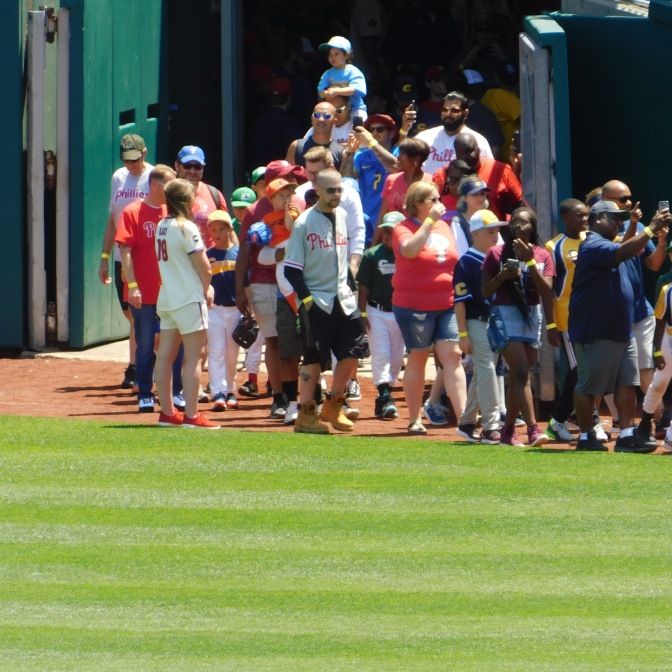 Their trip around the field was over all too soon, and they had to leave the field:

But I’m guessing it was a moment they aren’t likely to forget soon!

As news broke of Bryce Harper signing with the Philadelphia Phillies, one Nats reporter noted:

If Harper gets no opt outs in this 13-year deal, the Nationals will see him in a Phillies uniform 247 times in a regular season game. (Assuming health.)

Bryce Harper in 2017, photo by Keith Allison (via Wikipedia)

That got me thinking: how many games have the Nats and Phillies played against each other? How have the Nats fared? How will the Nats do against the Phillies without Bryce?

Well, I have answers to the first two questions. Only time will tell the answer to the third question.

Baseball Reference provides stats for each team’s season. So, here’s how the Nats have fared against the Phillies since 2005 (when the Expos moved to Washington, DC, and became the Nats):

How have individual Nats pitchers done against the Phillies? Here are the records of a few current and former Nationals pitchers: 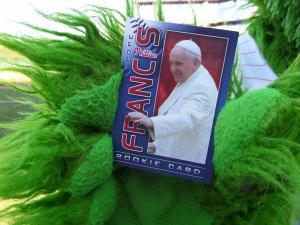 The Pope is coming to the United States today, and it’s a pretty big deal – even for baseball. Last week, the Philadelphia Phillies gave away “Pope Rookie Cards,” featuring the pontiff and providing his stats. 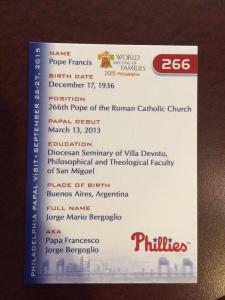 Last year around this time, Pope Francis made baseball headlines with his attempt at catching a ball tossed to him in St. Peter’s Square. As the New York Daily News reported, “The ball bounced from his extended right hand and fell to the ground – along with his skullcap. If you’re scoring at home, that’s no error on the Pope. He’s infallible.” 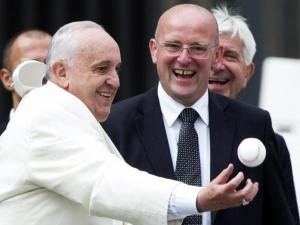 It seems like everyone is catching Pope Fever, even my favorite local team, the Bowie Baysox: